My creative space - it is done! 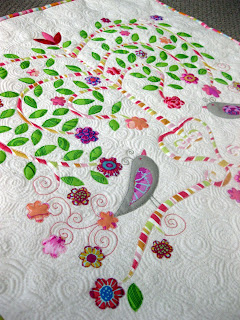 Well after many hours (I don't like to think about how many!) Willow is finally complete (OK, I admit I still have to hand stitch the binding down, but that doesn't count, right?) Sooooo happy with this, and even though there is something slightly irksome about the wonky swirls in the top right hand corner of the quilt (why didn't I pick somewhere a bit less conspicuous to start?), it is kind of satisfying to notice how much better my technique has become through doing this project. I'm so proud of it. 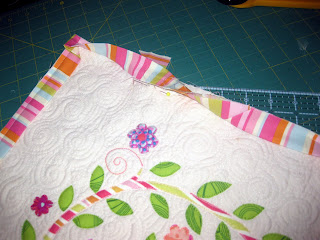 Just had to share with you also a little binding accident. This has never happened to me before, but it was inevitable really. I don't know about you but I struggle with the last bit of joining the binding together with a mitred seam. It is just so unbelievably fiddly and I can never remember exactly how to put it together. Anyway, I thought I'd managed it, after about 10 minutes of wrestling and only a couple of swear words, when I went to iron the seam open (and yes I trimmed it first!! Big mistake!!) I realised that the bloody thing was twisted. There is no fudging a twisted binding I quickly discovered. And now thanks to the trimmed seam allowance I had even less fiddling room. All is well that ends well and I succeeded in covering up what was an extremely dodgy seam. You wouldn't even know! 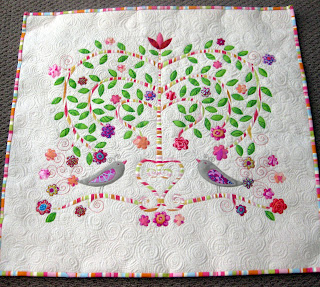 I even added a hanging pocket. Really! How organised! I amaze myself sometimes. This is going to go up on my daughter's bedroom wall. And hopefully she'll love it for a very long time.

More creative spaces (from clever people who have probably never twisted their binding) at Kirsty's.
Posted by Danielle at 8:40 PM