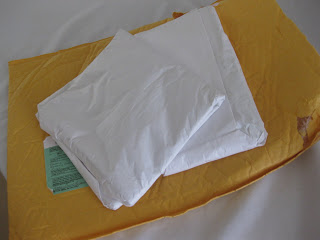 This was a very good week when it came to parcels - the most exciting kind of parcel of all arrived at my house. A Modern Swappers parcel. My very first swap!! I could barely contain my excitement when I saw the name on the parcel. I was pretty sure I knew that this was going to be inside.... 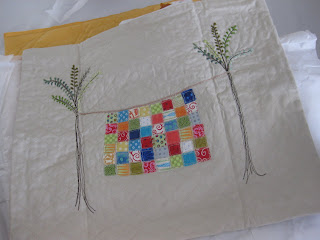 The most adorable cushion cover, made out of linen with the sweetest mini quilt made out of tiny cut squares stitched down. The quilting over the entire cover is an exquisite cross-hatch, so perfect. I just love it. 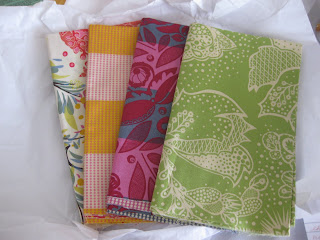 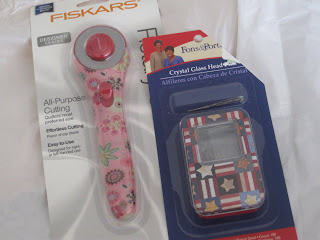 And finally, the grooviest rotary cutter and pins ever.

Thanks Joan, I love my goodies so much. I loved this swap. I can't wait to do another one. But first I can't wait to see what my partner thinks of her goodies. They should be arriving any day now.
Posted by Danielle at 3:05 PM 1 comment:

Half-square triangles baby quilt
Originally uploaded by Petitselefants
Loving this layout, but struggling a little bit with the bulky seams - sometimes there are 6 or 8 pieces coming to a point. I've tried snipping the first few stitches and opening up the seams, but I don't think they're ever going to lay completely flat. Perhaps it's just a case of practice makes perfect. Or trial and error? Either way, it's still looking pretty, no?

This little one is for my dear friend Bec's new baby, Charlotte, born last week. Sadly they are not in the same city as me but I'm hoping for a work trip soon so I'll be able to go and visit (and deliver the quilt. Because it will be finished soon. I promise!!)
Posted by Danielle at 8:46 PM 1 comment:

Two little birdies - for Modern Swappers
Originally uploaded by Petitselefants
I loved quilting this project. Never mind the fact that I started quilting it only to discover about twelve beautiful swirls later that the backing fabric was folded over and I'd quilted through both layers.... eeeerrrrggghhh. My time is so precious I hate to waste it unpicking! But never mind, it could have been worse!

And yes, it did take a lot more than 10 minutes. Maybe an hour all up. Not counting the unpicking. Ahem.

Anyway, so proud of this one and so pleased with how the swirls are going - getting better and better. Practice definitely does make perfect. I am nearly ready to show you the completed 'Willow' too - very happy with that too!

Two little birdies will be winging their way to my Modern Swap partner this week - along with some other goodies.

Hope you are all having a lovely Tuesday.

Oh, and if you haven't already seen it you absolutely MUST go and check out the most amazing craft room ever. I have serious craft room envy. Says the woman sitting at the dining table surrounded by sewing crap, with numerous toys strewn at her feet.
Posted by Danielle at 4:06 PM 7 comments:

More creative spaces as always at Kirsty's.
Posted by Danielle at 3:45 PM 9 comments: 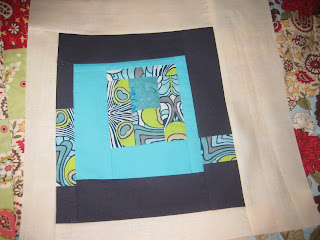 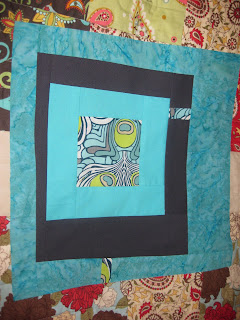 Gosh, it has been a couple of weeks since I posted anything here. Since I started back at work 2 months ago sewing time has been severly depleted, and I find that despite my best intentions, I really can't sit down at the sewing machine at night after the kids have gone to bed. Firstly I'm too tired to concentrate properly and would be worried about making mistakes which I'd then just have to re-do, and secondly, there aren't that many free hours in the day to spend with Craig - it doesn't seem fair to take myself off to another room to sew. So hand-sewing at night is pretty much the only options - and to that end I have been plugging away with the Joseph's Coat petals....

And at the weekend - well that's been pretty sporadic too. My kids are aged 6, 3 and 1, and well, that obviously entails a lot of hands-on stuff! Not that I am begrudging them my time - I know that in a few short years they'll be off with their friends and won't care too much about spending time with us. So I will just fit it in where I can and try to stop feeling so envious of all my blogging and Flickr friends who produce oodles of beautiful things in the time it takes me to quilt half a pillow.... Let's just say I continue to be endlessly inspired by so many clever people. And that I look forward to the day when I have heaps of spare time to produce as much. But in the meantime - my kiddies are only going to be this little for a little while!! :-) And they are so cute. Even if they do drive me crazy occasionally.

So just a couple of Bee Blocks to share with you today - Susan asked for a wonky log-cabin/square-in-square style. A little outside my comfort zone, but actually these were such fun to make. The colours were also nothing like anything I've used before. But I love them together. The aqua and dark blue are beautiful. Next up are Lynne's Union Jack blocks which I'm intrigued about - more paper piecing!

I've also been working on something for my Modern Swap partner - but not ready to show it yet!
Posted by Danielle at 9:17 AM 2 comments: