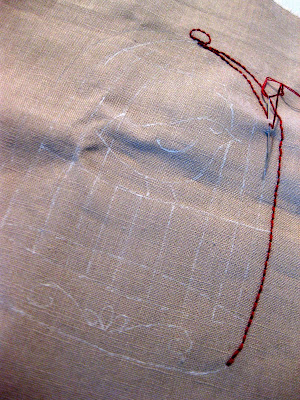 I can't explain it. I have approximately 4,623 projects on the go, but still I had the uncontrollable urge today to start something new. Linen and red thread, cute bird .... how could I say no?..... The pattern is from here.

More creative spaces over at Kirsty's place.
Posted by Danielle at 4:13 PM 11 comments: 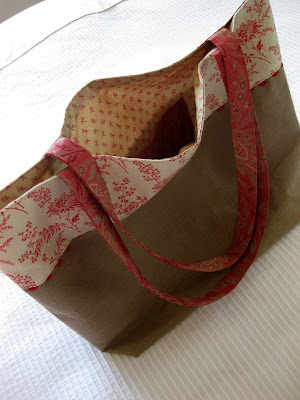 Sadly I've been missing in action from the bloggy scene for the past couple of weeks, but that doesn't mean I haven't been busy slaving over a hot sewing machine!! Some months ago I swooped on a big pile of Rouenneries fabric from French General. I am so in love with this line, it is simply divine. My initial intention was to make a quilt for our bed and I'm still toying with various designs.

But while I'm waiting for my inspiration to settle into something more concrete, I decided the time had come to cut into the lovely pile - well, at least a little bit of it - and whipped up a tote for my aunt's birthday. 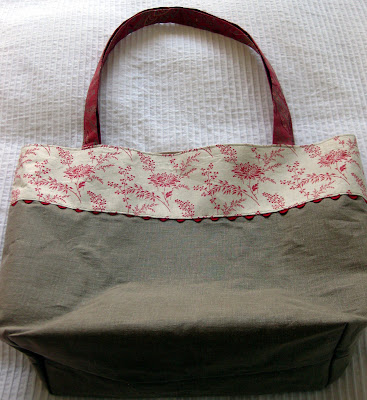 In the meantime I've also been progressing with the pink quilt. Now all that's left to do is put on the binding. I decided to put a solid pink around each of the blocks, using several different shades of solid. I didn't really plan it and when it came time to arrange the twelve blocks it turned out to be a bit of a task to set them out without blocks of the same colour adjoining each other. Anyway, I think it turned out OK in the end! The quilting is a pretty simple pattern, just in-the-ditch around the blocks, a cross through the centres, and some (occasionally wonky) railway tracks through the solid pinks.

All the while my head continues to swim with other ideas for new projects! Not enough hours in the day at the moment! 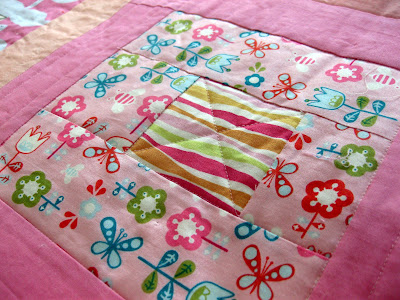 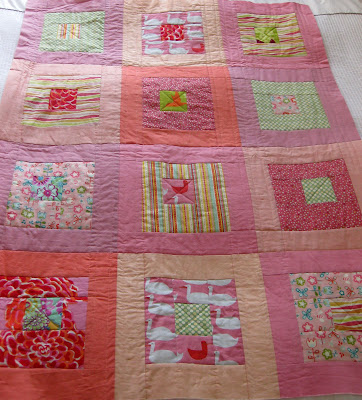