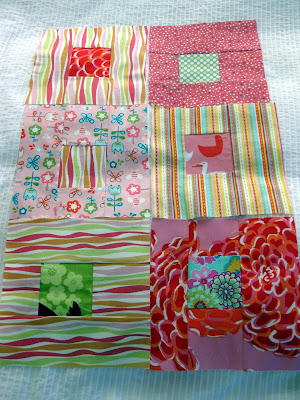 Today it's all about pink! This little project will become a quilt for a four-year-old girl. I don't know what this block is called, but it's basically a 3.5 inch square surrounded by strips. I have offset the square in some blocks, and centred it in others. I think it will be 3 blocks by 4.

Now I'm thinking about putting another layer around each one, in a pink solid (in fact, I have three or four different pinks and may use some of each). If anyone is reading this and has some suggestions I would love to hear them!

And while we're at it - here's another pleated tote I whipped up yesterday for my sister.

To see lots of creative clever people, head over here. 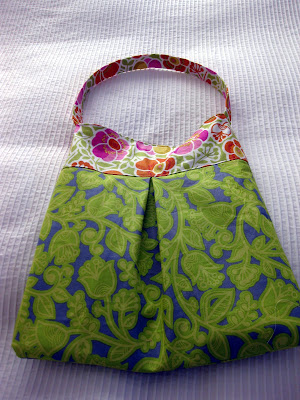 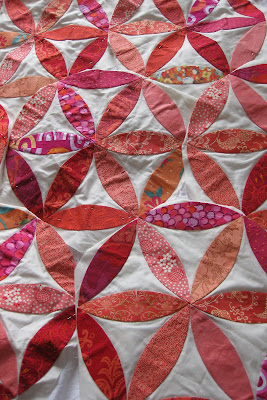 Well time for a little update on this loooooong term project.

Firstly I have to say I'm enjoying this enormously, I love sewing down all those little petals, it's great fun. The preparation, errr, not so much, but after having traced, cut out, ironed on, cut out again, and again, glued (occasionally with swear words), and glued again.... well let's just say it is at least getting quicker! And I love the satisfaction of getting 12 petals glued down on the background and they look so pretty before being pinned and stitched, and ending up all wrinkly as per the photos you see here. Sorry, but there is just no time for ironing!! 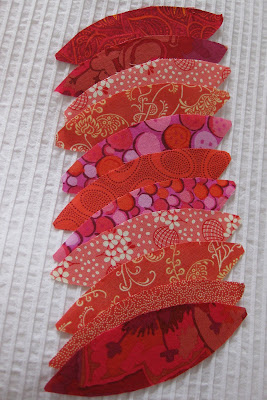 I did have some problems with the first few blocks as far as getting the petals down on the background (and making them fit in the right spot) goes. Often I would get 11 petals down with no problems, but as soon as I tried to get #12 down, no way, it just would not fit! Overhang of several millimetres - so frustrating!! Then I worked out that my stabiliser petals were all just a tiny bit too big. I hadn't bothered checking them against the template (even though Kellie had suggested doing this in her instructions), because I thought pah! I'm tracing so carefully, what could possibly be wrong?? But lo and behold, each time I ran the pencil around the template, yep, it was just a touch too large. So after cutting I'm now checking each petal against the template and giving it a little haircut. And my life is so much the better for it!

As far as gluing down the edges goes, I am still finding it a little bit hit-and-miss. Sometimes I get great pointy points, sometimes they look like they've run into a brick wall at high speed (and have a flat nose). But what works best for me is a tip I adapted from one of the other Josephs Coat participants, Shelly, early in the piece, which is to use a pin at the very point of the stabiliser and fold down the top edge over that, this helps make sure that I fold over exactly the right amount of fabric, not a bit too much or too little. And then when folding over the first side edge, I make sure that edge runs parallel to the opposite side. On the whole it's working pretty well now. (Thanks for the tip Shelly!) 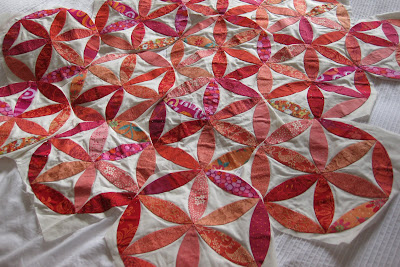 Anyway, as you can see I haven't started stitching the rows together yet (despite best intentions). I had actually intended to have rows 1 and 2 done at the end of February so that I could take them to show Kellie when I did her class in Canberra, but alas, I didn't make it - and three weeks later I still haven't done it (but I have been doing lots of other stuff in the meantime!!)

I think I'm leaning towards making this a 6 x 6 block size, possibly with some borders, so I'm looking forward to seeing what Kellie suggests in that department.

The big mystery remains, who will the quilt be for? I don't really know, to be honest, I just wanted to make it because it's so beautiful, I wanted a handsewing project, and I had already collected these gorgeous pinky-oranges and they were just perfect for this project. Although I have supplemented in the process. Ahem. I think at the end of the day, there will have been so much of me put into this quilt, I just won't be able to part with it. But we'll see!

Thanks to Kellie for a fantastic project. The extra late nights of stitching are so enjoyable!!
Posted by Danielle at 10:35 AM 9 comments: 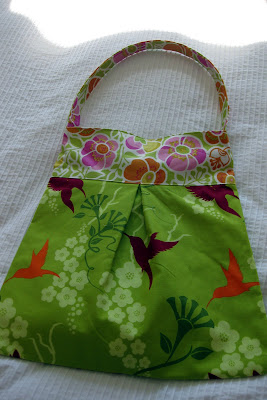 The sewing frenzy continues! Funny how finishing a project instantly spurs on more action on new projects - exponentially so. By the end of the month I will probably have about 8 projects on the go - is that completely insane? Probably. I'm going beserk with my sewing machine because my return-to-work date of July is looming prominently in the foreground. Only 4 months to go, and so much to do!! I may need to start sewing in my sleep.

Anyway, today I finally delivered the 40th birthday quilt to my dear friend. As expected she loved it and was of course not the least bit perturbed that it was nearly 6 months late. I'm so pleased with how it turned out and so proud that I did everything myself. Have got plans to do another similar one. After a few other projects are complete. Ahem.

So having finished that one, I thought I would make myself something for a change and yesterday afternoon finding myself with a couple of hours to kill whipped up a fab new bag. I'm so happy with it! I can't stop looking at it!

The amazing green hummingbird fabric is from Patty Young's Flora and Fauna collection. (Sadly I've used up every skerrick I had of this and now wish I'd got some more...), the top band and handle is Wildwood by Erin McMorris, and the lining is from Sweet by Urban Chiks (it is a green backgrounded polka dot print - sadly cannot be seen because Blogger is refusing to upload any more pictures). And the pattern is by Ali Foster. A wonderful pattern - I will definitely be making some more of these bags. I will just make the handle a smidgen longer next time. 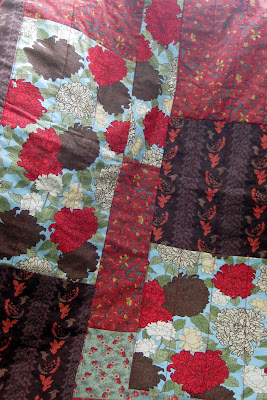 Here's a project that has been in production for an embarassingly long period of time - promised for a friend's 40th birthday which took place in November. (Sorry, but how did it suddenly become March??) 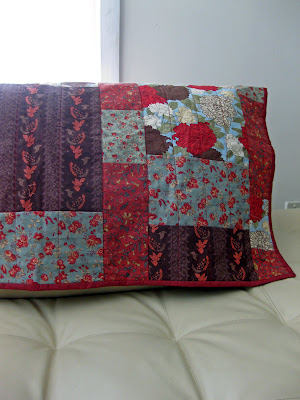 Just have the last few inches of binding to sew down (by hand). This is not my first quilt I've worked on, but it is the first quilt I've done entirely on my own - design, cutting, sewing, quilting, binding. It almost seems a shame to be giving it away, but I'm giving it of course to someone who will love it (and I'll have visiting rights). Craig wants one the same (a pity I do not have enough of the same fabrics).

The fabrics include Mums Blue from the Simple Abundance line by Bonnie and Camille - I love love love this fabric - after I'd decided to use it in this quilt I quickly ordered some more so it can still live in my stash until I find another worthy project. The teal green backgrounded florals are Wuthering Heights by Three Sisters for Moda from about four years ago (yes I've been hoarding them - plus some fat-eighths and a charm pack, ready and waiting!)