Just found this sweet little picture on Etsy by a Canadian artist Tine Wiggens - this would be lovely in Elli's room! I'm ashamed to say that I have been a bit of a failure when it comes to decorating my kids' rooms, it all looks a bit half-hearted. I'm hoping to change this though - it's really just a matter of a few more pictures and some strategic tidying up and everything will be beautiful! All part of the territory when it comes to squeezing three kids into two bedrooms!
Posted by Danielle at 9:28 AM No comments:

Being a total newbie to the blogging world, I find myself being amazed on a daily basis by all the clever people out there. And the things you find on a very circuitous route. I love reading A Little Red Ribbon (thanks Gret) - she always finds the most beautiful things (and makes some gorgeous vintage embroidery pouches). Today's find comes via there, through a wonderful site called Lovely Clusters, which takes all the hard work out of finding beautiful things - clever, huh? (A Little Red Ribbon is about to be featured there).

And there my attention was piqued by this gorgeous pink-leaved tree from A. T. Whim. A further peak at that site reveals an array of beautiful artwork - very tempted! A few of these grouped on a wall would be delightful. I really have a thing for trees at the moment!

I'm excited - one of my favourite designers, Anni Downes of Hatched and Patched, is close to releasing her next book full of things to make for little boys (and big ones too, I believe). On her blog today is this gorgeous photo which is tantalising - I think those robots are going to want a home here with my two little boys. Can't wait to see the book - hopefully we won't have to wait for too long!!
Posted by Danielle at 6:32 PM No comments:

...is being given away by the incredibly talented Kellie of Don't Look Now. I don't normally gush, but

I have to say of all the artisans out there in the big wide world of quilt-land, she is surely the pinnacle. One lucky person is going to win this quilt, and it would be great if it were me! Whoever wins will be the envy of many.

I am so in love with the bird and tree combination, as well as the selection of colours. Before I started lurking around the blogworld, I had various designs based on birds and trees floating around in my head. Little did I know that others before me had also stumbled upon this wonderful concept - who would have thought?? Anyway, such a simple concept really, but Kellie takes it to a whole new level. Her work is simply beautiful and it would be a privilege to own one of her quilts. Maybe one day I'll have the confidence to try one of her patterns....

Posted by Danielle at 1:37 PM No comments:

Getting my knitting groove back 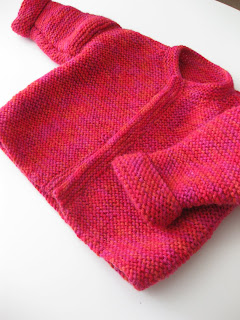 I am on a bit of a roll with knitting at the moment, having finally completed a little cardigan for little miss E a week or so ago (OK so I still haven't sewn on the buttons, but she's been wearing it, and it really doesn't need the buttons..........). Pleased with that accomplishment (yes, it had been on the go, on and off, since before she was born - 10 months ago) I decided to pop out a quick hat for the biggest little boy. It is a paper-bag style hat, knitted in a rectangle, very cute! 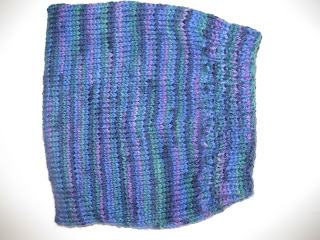 Sorry about the sideways shot - still getting the hang of this! I really love this wool, which is lucky, because there is still a lot of it left. More on that some other time. 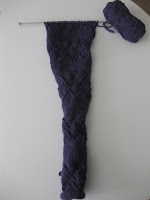 Then I decided I would knit a scarf for my sister. Weird that I have been knitting for years and years but never actually knitted a scarf. Isn't that just what everyone starts to knit when they learn how to knit, before getting completely bored and moving onto more interesting garments? Anyway, a scarf it will be, but in between times I unfortunately had to abandon the first attempt due to the dreaded stockinette curl syndrome. A pity, because the chevron lacy pattern was going really well and it would make a fantastic scarf, but sorry, that was way too curly. It had to go.

Luckily I found the perfect replacement designed by the very clever Terhi here - the picture below shows her original, mine will not be as wide, and given that it is in a darker wool, the pattern will not show up as well as this, but after having done about ten rows, and seeing the pattern start to emerge, I am really loving it. Thanks Terhi. 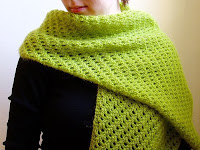 More tomorrow on another exciting knit-fest! 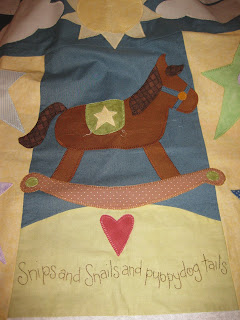 As is no doubt the case with everyone who likes to indulge in a little craftiness here and there, I have of course numerous works-in-progress. I am trying, however, to finish some of these off - admittedly, this is to some extent driven by a desire to start something new (and who doesn't have a list as long as their arm of things they want to start working on!?)

To get the ball rolling, I'm sharing with you today a quilt I've been making for my little man #2 - it was (you guessed it) supposed to be his baby quilt... and yes, he's turning 3 in just a couple of months, scarily enough. And yes, I have had another child since.... (and I haven't started her quilt yet!) Anyway, it is what it is - and I still love it, though I have to admit that I have moved on somewhat since I started this, and I would choose something totally different if I were starting something for him today.

The pattern is from Barri of Bare Roots who just makes the most adorable quilts and other bits and pieces. I have altered the pattern slightly (but not too much). The top is just about done - all the pieces are hand appliqued using the fusible web and blanket stitch technique (though in one section I have used backstitch for a different effect which I'm really pleased with). Just a few more circles to go around the border and then on to the sandwiching. I'm thinking of hand-quilting this, despite the fact that I know it will take me forever. If it's finished by the time little man turns 4 I'll be amazed!

As an aside, I actually started this quilt when I was 27 weeks pregnant with #2 - little did I know that only days later he was to arrive amidst much drama (at 28 weeks). Who knows if I might have actually got it finished in time if he'd gone full term??

Posted by Danielle at 3:38 PM No comments:

Hello out there! This is my first real go at this blogging business. In this little space I'd like to share my favourite bits and pieces - things to make, things I've made (when I actually get to do that!), things others have made, in the realm of crafty, home-y, baking things.
Posted by Danielle at 10:23 PM No comments: