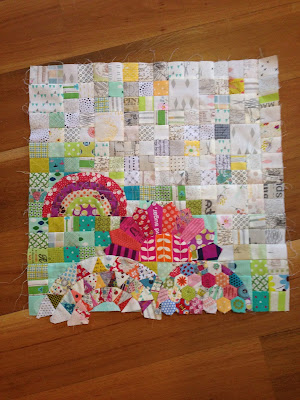 Back again to finish the third and fourth components of part 5, the pieced arcs and the hexagons. I decided I would hand piece these, and I'm not going to lie, when I looked at the size of the templates in the pattern, especially the teeny tiny triangles, I did get a little bit scared. But I really want to say, there is nothing to fear, this honestly was a breeze. Yes it is a bit of a tedium to cut all those little pieces, but in the grand scheme of things, it didn't take that long (I reckon you could easily sit down to start the arc section and have it all finished in a few hours if you really wanted to). Another way to do this that a lot of people are choosing is to foundation piece, and Kerry has shared some pics on how she went about this.

As with my other templates, I used freezer paper. I worked on one row at a time - don't go confusing yourself with a squillion tiny bits of fabric, things will only get lost and/or confused. I raided the ziplock bag of tiny scraps I'd been saving in the making of the quilt, and found plenty there to meet the needs of this part. I chose the right number of light coloured and medium coloured scraps, cut them into appropriate sizes, then one by one stood at the ironing board, pressing the template piece on, tracing round with a pencil and cutting out, leaving a 1/4 inch seam allowance (I eyeballed this and didn't draw it in, but if you like to be super careful or are new to hand piecing, it can be very helpful to draw the second line in).

Lay the pieces out in front of you, and starting from the left hand side, stitch two pieces together, add another, and another, and so on. You can see in the photo on the left below, I pinned at both ends of the stitching line, making sure that the pin went through exactly at the right spot on both pieces. Again use a tiny running stitch, taking a back stitch at the start of the line (I immediately remove the first pin before I start to stitch). Literally it will take ten or so seconds to stitch that tiny line! 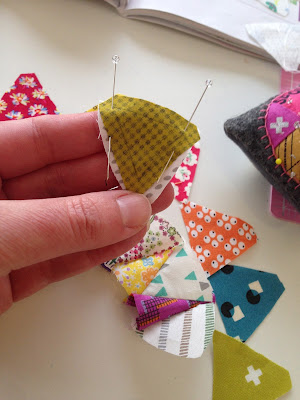 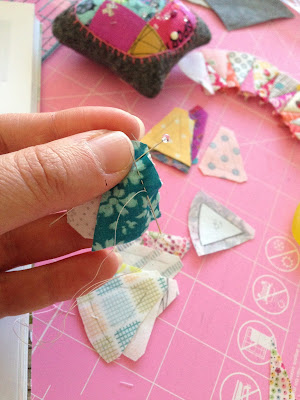 You don't even need to stop and cut your thread to start the next piece - just pin the next piece on in the same way, take the needle through to the other side, and start stitching the next line (take a back stitch first). As long as you align your pieces correctly and start at the right end, you can sew the whole row of triangles in one go. 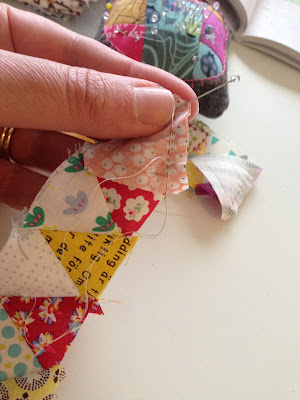 Once you've got all three arcs sewn, now comes the fun part of stitching the rows together. I used a lot of pins again, aligning the tip of the skinny triangle in the row below with the midpoint of the bottom of the triangle in the row above. Stitch in one line, taking a back stitch at the start and end of each drawn line, and taking the thread through to the next piece (that is, don't stitch the seam allowances down, just pass through the intersecting points and take a backstitch before you start again). 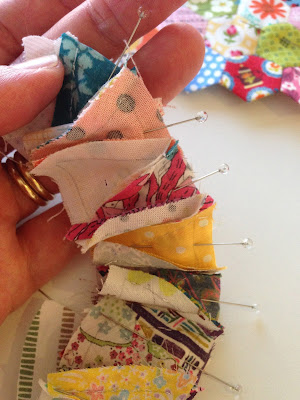 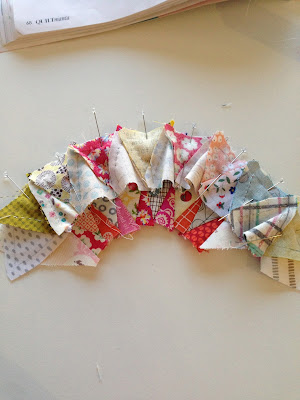 I didn't take a picture of the appliqué part of this step, but all I did was finger press the top edge of the rainbow over by 1/4 inch, paint the seam allowance with a little starch, and then press with the iron. Glue into place and stitch. I have to confess at this point I made a little error - I hadn't realised that the inner semi-circle left by the rainbow was not meant to be an extra piece appliquéd on, but was just the background fabric poking through from underneath, and therefore the bottom edge also needed to be turned under and appliquéd. When I realised this, I'd already attached the top edge, and so it was a bit awkward to press the bottom edge into place. As a result, it looks like a bit of a dog's breakfast. (You can see it in the picture at the top of this post). I might still go back and appliqué a piece over the top instead. Or I might just leave it. 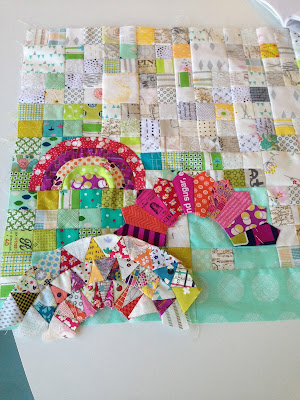 Also a note about the number of pieces in the triangle arcs - look carefully at the pattern, some of this part gets covered up by the adjacent hexy rainbow, so remember that you don't have to do complete arcs (through to the right hand side, see above). Think about this when you place the piece on the background ready to appliqué, and also remember that you'll be losing the bottom of it in the seam allowance when part 5 is sewn to part 6, so you need to account for that too. 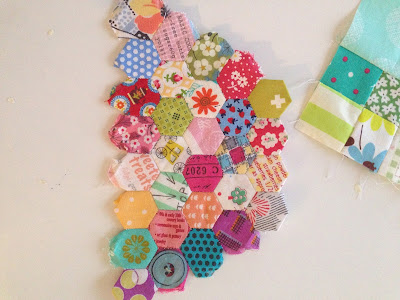 Apologies for the sideways pictures (?!) Next on to the hexagons. (If you don't fancy making this section out of hexagons, you could just cut a single fabric using the semi-circle template, perhaps one that is patterned in a hexy cheater pattern, or anything else that fits in with your project). I did these using the English Paper Piecing method, basting my fabrics onto 1/2 inch hexy papers and sewing them into rows. Remove all the papers and press. Then press the freezer paper semi-circle template onto the wrong side, taking care with the placement - you'll be turning the edge over by 1/4 inch so make sure you've left enough space. I found mine to be pretty tight in places, so I let the seam allowance of the hexies out in order to leave enough to turn over (see how they're a bit pulled out of shape in the pic below?)

Trim carefully! Then paint with starch and press over the edge of the freezer paper. 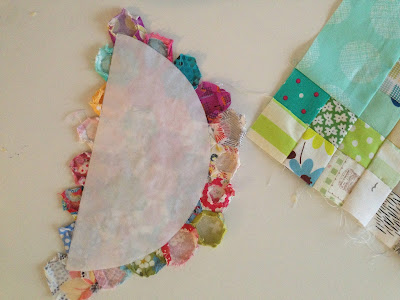 Glue onto the background, taking care with placement, and appliqué in place. 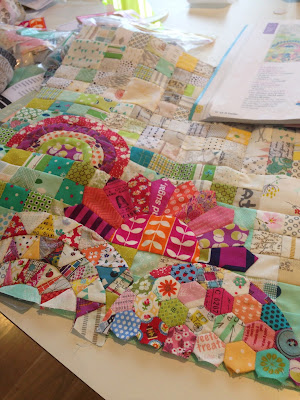 When you've finished, trim the background away, leaving an allowance behind, then remove the freezer paper. 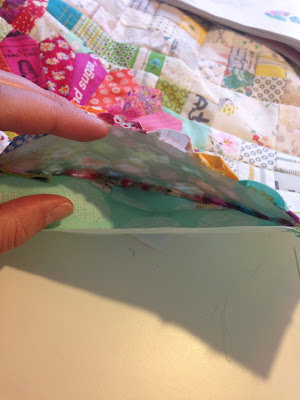 Please let me know if you have any questions about any of these techniques, or share what you've done.
Posted by Danielle at 8:13 PM 3 comments:

When Kerry emailed me to ask if I would like to be a co-host of the quilt-along she was planning for My Small World, I didn't hesitate to say yes! I had already purchased the Quiltmania Spring edition especially for Jen Kingwell's gorgeous pattern. At the time, I said to Kerry that I didn't think I'd be able to do much more than my allocated part (part 5), but to my surprise I've found this to be one of the most compelling projects I've worked on in a long time and I've nearly finished it! I don't like to gush, but I really have had so much fun working on this one and I'm really pleased with the way it's turned out. 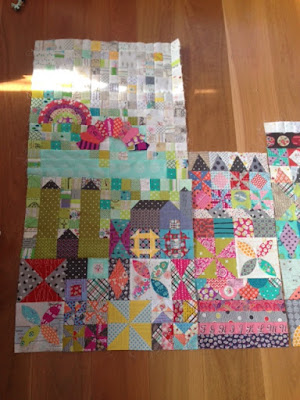 So, onto part 5. This part contains four different versions of rainbows, each appliquéd onto the background - pieced arcs, a half Dresden, hexagons, and a New York Beauty variation. If you haven't tried any of these before, perhaps this part looks a little daunting. But I'm here to reassure you that it's really not, and you should give them all a go! As with many parts of this quilt though, if there's something that's not quite your thing, there's always an alternative way of making it, or swapping something else in that you feel happier making. I've been mainly machine piecing this quilt, apart from the appliqué parts, but for part 5, I've hand pieced three out of the four components.

First - the background. The one thing I did differently to the pattern was to substitute in bigger pieces where these would be covered by the rainbows. I didn't want to go to the effort of piecing tiny square only to cut them away later. It's very simple to work this out by looking at the diagram, simply by counting the number of squares in a row you want to cover in a bigger piece, and adding a half inch (quarter inch at either end). So if it's six squares to cover, cut your piece 6.5 inches by 1.5 inches (instead of six 1.5 inch squares). (Excuse my rather rubbish iPhone pics, by the way). 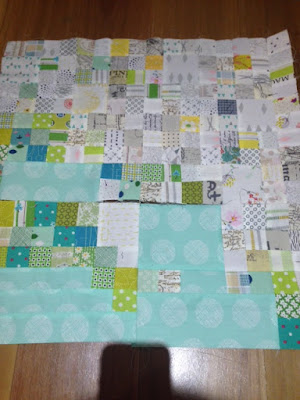 Next the pieced arcs.

I like to use freezer paper to make my templates. Trace the template onto the 'paper side', cut it out exactly on the line, and press onto the fabric, then trace around onto the fabric with a pencil. No shifting of the template, works beautifully. 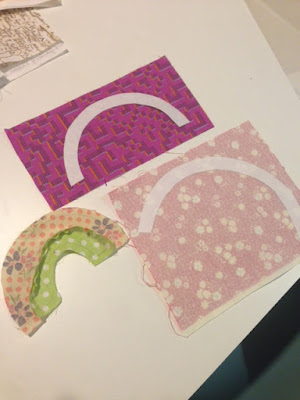 Cut around the pencil line, leaving a 1/4 inch seam. You don't have to draw the 1/4 inch line in, but it is useful. Your first pencil line, around the template, is your sewing line, but it helps to keep things lined up if the seam is exactly cut at 1/4 inch, but this isn't super important. The main thing is to pin exactly on the sewing line, on both pieces that are being sewn. And by pin, I mean pin. A lot. Start by finger pressing the half way point on both pieces, matching the creases and pinning at that point. Then gently ease the curve around, placing a pin approximately every 1/2 inch or even closer, making sure that you're putting the pin through the pencil line on both sides. 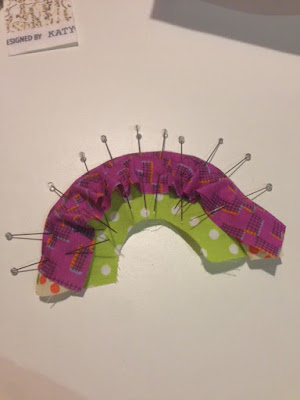 Then sew with a tiny running stitch, securing with a back stitch at the start (as well as a knot!) I generally load 5 or 6 stitches onto my needle at a time, pull the needle through, then take a backstitch before stitching the next 5 or 6. Remove the pins and hold the edges of the piece taut as you go, easing as necessary. 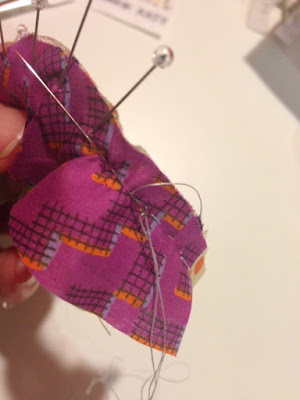 Next comes the half Dresden plate. Again, I used freezer paper for my templates, tracing ten templates and cutting out, then ironing onto my fabrics. This time I machine pieced them, simply stitching  from the bottom corner straight up the line to the next corner and stopping. As with stitching all small pieces on the machine, a slightly smaller stitch length is useful. I left the freezer paper on for this step, using it as a guide for where to stitch, exactly next to the template. 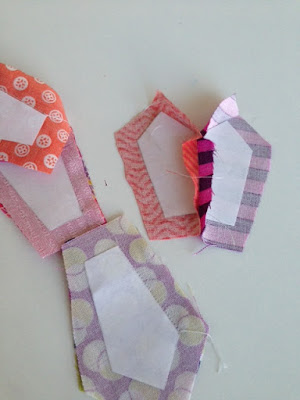 When they're all stitched together, you can fold the top triangle edges over - it helps to trim them back slightly. I sprayed a little starch into a jar lid, and painted the edges of the fabric with starch before pressing them into place, which helps them hold their shape. 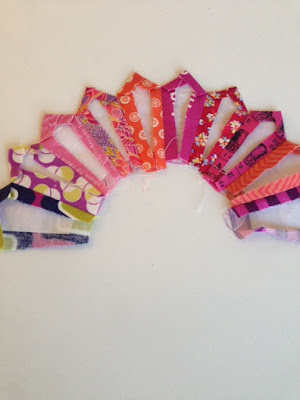 Then the piece is ready to be appliquéd on. To do this, I like to use Roxanne's basting glue - I just dab a little on the outer edge of the piece and press down onto the background. No need for pins! 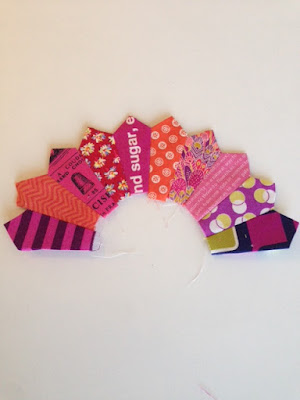 I'll be back in a few days with some pictures of the next two rainbows. In the meantime, if you're on Instagram you can see a few pics of the tiny pieced triangles in progress. Find me at @petitselefants.

Thanks for sewing along! It's so fun seeing everyone's versions of this special little quilt. :)