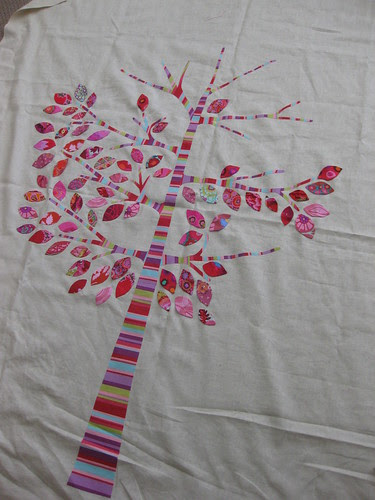 Lilly Pilly - growing some more leaves a photo by Petitselefants on Flickr.

Yes, it's been ages since I last blogged, life has been busy! I can't believe it's already halfway through Term 1. Halfway!! The year will be over before we know it.

There hasn't been an awful lot happening on the sewing front, mainly because of Mr Tennis Elbow who has well and truly outstayed his welcome. (Not that he was welcome in the first place). It has been a long road. Six weeks. But I'm nearly there. Sewing maching activity has reduced to practically zero (I had a quick 15 minute burst last weekend just to test the waters, and happily survived without a repeat of my last attempt).

On the upside - handsewing has been going gangbusters. I didn't believe Kellie when she said that Lilly Pilly was a quick project. I thought, mmm sure, that will sit around in my cupboard for at least 5 years before it gets finished. But - au contraire - the tree is growing very nicely! Of approximately 130 leaves I have sewn down 92. Yes that's right - 92 leaves!! Mainly at night in front of the TV. Not every night, but on the nights when I get it out of the - ahem - project cupboard - I usually get about 6 to 8 leaves sewn.

Added to the sewing part is the preparation part, which is, shall we say, a little tedious and not as much fun as the sewing part (tracing, cutting out, ironing onto fabric, cutting out again, trimming, gluing the edges, setting out the leaves on the tree, gluing, pinning). I won't try and estimate how much time that takes. But nobody says you have to prepare 130 leaves at once. If you break it up, do a bunch at a time - easy peasy!

The progress should actually be one that looks a bit more advanced than this. But I am having such an unenjoyable time trying to upload photos to Flickr at the moment that I just can't be faffed with another one, this will have to do. I'm sure you get the picture by now!

So, there it is - nearly done. The quilting though.... that will be a gargantuan effort. Let's discuss that some other time!

More works in progress at Lee's.