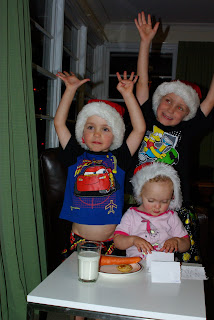 I've been notably absent from these parts in recent times. The last few weeks of the year were a little hectic - starting a new job and having visitors staying for Christmas does not a relaxing December make! On top of that I somehow got a terrible cold which knocked me over for a while (but all the while still having to work etc). Anyway, all of a sudden it's January. And 2011. Amazing. But don't get me started! 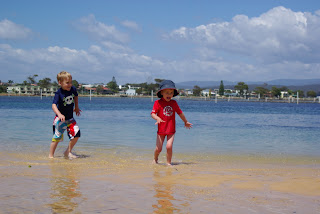 December was a shocking month, in weather terms. It rained and rained and rained. Then it rained some more. After seven years of drought, this came as a bit of a shock. Unfortunately we had planned a little mini-holiday to the beach at this time. Here's a shot of the boys enjoying the beach, in between rain periods. Luckily we were staying in a fabulous house which had lots of space for everyone to spread out in - the rain didn't really matter and we all had a lovely time. 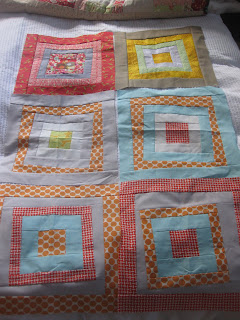 Needless to say, my sewing ambitions for December were unfulfilled. I managed to complete my package for Modern Swappers - will have to post on that later. And I finished my blocks for the 3x6 mini-bee, and Amanda's blocks for FMB2. As well as a little doll quilt for the MiniQT swap which was heaps of fun. 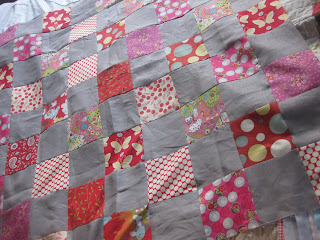 And now onto 2011! I couldn't possibly let the first week of January pass without starting another project now, could I? In recent weeks I think my husband has started to realise the enormity of my obsession and exactly how many projects I have on the go. Top of his list that must be finished, come hell and highwater, is Finn's baby quilt. He's 4. I know.

Anyway, in the interests of short posting I will leave that here for now and return soon with a post about my swaps received and sent, and also about my quilty plans for 2011. Plus some pics of fabric purchases. Only little ones. I promise.
Posted by Danielle at 3:52 PM